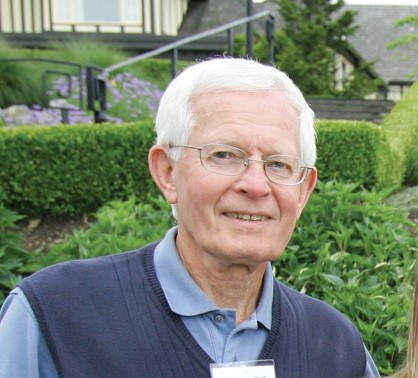 Leslie (Les) Blake Janz, loved by so many, passed peacefully at home at age 87 with Wendy, his wife of 62 years by his side.  Les was born in Rosthern, SK, the eldest son of William and Hilda Janz. After his early childhood living in Lanigan and Winter, SK, the family moved to Fort Langley, BC in 1946. Les was valedictorian at his graduation from Langley High School in 1952.

Les went on to UBC to pursue a medical degree, which he obtained in 1958. During this time, he met his future wife, Wendy, a spectator at a high school basketball tournament being held at UBC. It wasn’t quite love at first sight but in 1957, while they were both working at North Vancouver General Hospital, Les as a 4th year medical student and Wendy as a nurse, they reconnected and were married one year later. Upon completion of his internship at Vancouver General Hospital they moved to West Vancouver where he joined Lions Gate Hospital and started his family practice until his retirement in 2007.

During his 48-year career as a family physician on the North Shore, Dr. Les Janz was widely recognized for his extraordinary care, dedication and compassion for his patients. Les was truly a GP when general practice meant available full service to his cherished patients, including office practice, house calls and hospital care, always suited up and looking the part, providing compassionate care to all. Administratively at LGH, Les served on the Committee for the Division of General Practice, President of the Medical Staff, Chairman of the BCMA hospital committee, and was Chief of Staff from 1992-1997. His legacy as a family doctor will continue for future generations of health care practitioners via an endowment from an anonymous donor that funds the annual Dr. Les Janz Leadership Awards.

Les also embraced family and the challenges of golf and bridge, which he loved. Wednesdays were his days off, taking his children out of school for road trips to Whistler or the North Shore mountains for ski days. He was a valued member of Capilano Golf and Country Club since 1971 where he could be found chasing elusive birdies and engaged in friendly games for bragging rights. Les will always be remembered for his quick and witty sense of humour, which was passed along by nature and nurture to his entire family and served him well on the golf course, the bridge table, or during his 40 years as a Canucks season ticket holder.

In lieu of flowers, please consider a tribute donation to the Dr. Les Janz Leadership Fund, c/o Lions Gate Hospital Foundation or to the charity of your choice.