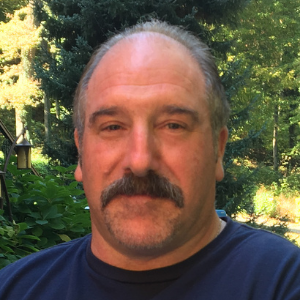 Born at Vancouver General Hospital with a life-threatening heart defect, Roy persevered through many surgeries and setbacks. Perhaps starting his life having to fight for his life is why Roy was so good at living. He valued family, friends and love above all else.

After graduating from Eric Hamber Secondary, Roy obtained his butcher certificate from VVI (now VCC). His pride in his craft was a joy to watch. Roy earned the honour of “Best Butcher” in North Van and was known to some as “Roy the Butcher” on the Bro Jake Morning Show in the 1990s.

Despite his medical history (or perhaps because of it!), Roy immersed himself in sports, starting with soccer, hockey and baseball, and later taking on golf and curling. The Canucks and Pittsburgh Steelers lost one of their best fans. Roy was also a bit of a daredevil, including taking great joy in going fast in his Porsche 911.

While Roy had a competitive streak, sports were more of an excuse to get together with friends. Roy was so thoughtful and touched the hearts of many – he didn’t just have a large group of friends, he had an extended family. The breadth and abundance of all the wonderful memories of Roy are a blessing to the world. He will be missed.

Roy is survived by his brother, Brent Balluff (Susan), and sisters Barbara Mah (Lloyd) and Karien Balluff (David), as well as 6 nieces and nephews, numerous friends and extended family. He will always be in our hearts.

In lieu of flowers, donations can be made to the chemotherapy unit at LGH.