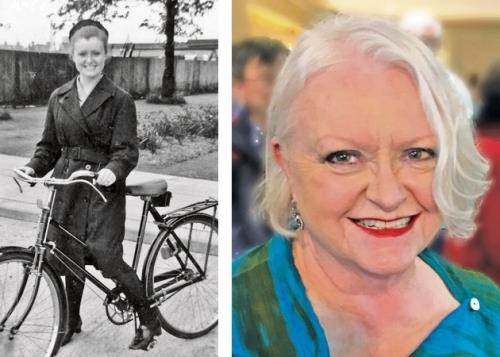 In honour of the one-year anniversary of Carol Hird’s passing and International Day of the Midwife, her husband, Brian Burtch is matching donations up to $5,000. If you would like to make a donation in Carol’s memory, please donate at the link on the bottom of this page.

Carol was born in Hull, Yorkshire on July 15, 1946, the eldest of five children to Nell and Douglas Hird. As the big sister to Tina, Tony, Andy and Ian, Carol maintained a constant love of her family in England and later, through marriage, her family in Canada. Carol completed a nursing qualification at Kingston General Hospital, Hull and then completed her Midwifery Teaching Diploma at Sheffield. After working as a district midwife in Yorkshire, Carol emigrated to Canada in 1972. Carol worked in Fort Churchill before moving to Edmonton and eventually to North Vancouver where she continued her work as a nurse and midwife. Carol had an innate ability to help others. She excelled in formal nursing and midwifery programs and developed into a skilled clinician and respected teacher. Carol believed in evidence-based practice. She would ask “where’s your evidence?” to detractors of midwifery while maintaining her determination and poise. A champion and leader of the Midwives Association of BC, Carol also served on the executive of the International Confederation of Midwives for nine years. In 1993, during the ICM triennial congress in Vancouver, Carol was President of the ICM and vice-president of the MABC. Thousands of delegates were moved by the announcement from the then-Minister of Health that steps would be taken to establish professional midwifery in British Columbia. Carol was a true leader within a team that lobbied successfully for the recognition of professional midwifery in Canada. Carol received her MA in Midwifery Practice from Thames Valley University, London in 1996. In 2005, she was honoured by the MABC with a certificate of honourary membership “for her outstanding contribution to the advancement of midwifery in BC”. Carol received the 2009 North Shore Health Care Award for outstanding achievement in leadership. Carol’s contributions as a clinician, teacher, administrator, nurse, advocate and leader in the midwifery movement resulted in awards and accolades, but she was likely more touched by the scores of thank-you cards and letters from women and their families. In this correspondence, she is hailed for her grace and skill throughout pregnancy, birth, and postpartum. Carol was appreciated by midwifery clients and patients in hospital, hailed as a “cool boss”, an inspirational teacher, mentor to aspiring nurses and midwives, someone with “the best hugs”, and a genuinely interested and interesting person. At this time when people are so deeply saddened it helps to know that Carol was beloved and appreciated. Carol leaves behind her loving husband, Brian Burtch, stepdaughter Leora Gibson, son-in-law Trent Gibson, and three grandchildren (Maeve, Torsten, Ella), along with her deeply loving family in England, British Columbia, and Ontario, and so many great friends. Reflecting on over 34 years of loving Carol, Brian fondly remembers how his Carol was truly “our Carol”, someone who belonged to her family, friends, and the many people she cared for. Carol fought ovarian cancer for over four years. Carol passed in the North Shore Hospice on April 29th, with Brian by her side. Brian and Carol felt profound gratitude to everyone who helped her through her cancer journey. These include her compassionate oncologist, Dr. Avanessian, the “earth angels” nursing team and volunteers in the Oncology department at Lions Gate Hospital, her GP Dr. Joanne Larsen, surgeons and surgical teams, and other health professionals and support staff, scores of people she worked with, the two book clubs who cherished her, and everyone who hoped that Carol would be in the “100 percent Club” of remission. She took heart in what she called a “jetstream” of love and support. Donations can be made to the Lions Gate Foundation or the In Memoriam Carol Hird award to support midwifery students at UBC. A formal celebration of Carol’s life will take place at a date when we can safely gather. The place and date for gathering will be announced through the online memory page kindly maintained by the excellent staff at McKenzie Funeral Services. May 5th is the International Day of the Midwife. The theme for the ICM 2020 campaign is “celebrate, demonstrate, mobilize, unite – our time is NOW!” This captures the way that many of us we will remember Carol. Our Carol. To write a condolence to the family, please visit www.mckenziefuneralservices.com